To race the way you love… With your entire heart, with passion…

That’s the biggest source of a sportsman’s/woman’s motivation. When some others just look at his/her result(place), sportsman/woman first care about own-satisfaction. Perhaps the result on paper is bad, but if the individual enjoyed the race “definitely”, did everything he/she could, is the result still bad? My answer is, no! In my opinion, we lose only if we give up fighting. That’s why I feel I never took a beating, never lost a race.  Because whatever happens I never gave up! Of course sometimes I had bad times and couldn’t give a high performance, but I always took my lessons from those races. That’s why I feel I win.

As you understand, last weekend we were in Albstadt for the 4th World Cup race and I finished “definetely” satisfied. 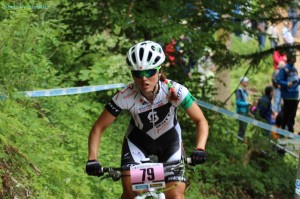 My training was good on Saturday in the course. I only made a mistake in the first training lap at Devil’s Corner. Next lap was very good. First lap I also wanted to have a look at “chicken run” but easy way was harder than Devil’s Corner for me. By the way the course was shortened for redbull.tv. It was technically easier than Nove Mesto, less climbs but steep and very fast. 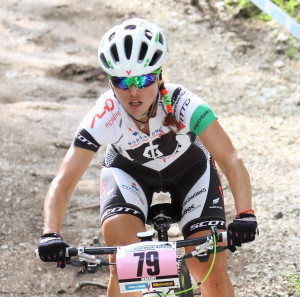 I couldn’t sleep in the night before the race. Actually that was a good sign for me. Because whenever I can not sleep before the race, I feel good in the race. : ) On Sunday everything went good from the morning. Thomas and I had a very good breakfast. But somehow I was nervous which I think I like to be before the race.  When the race started, I had a problem with locking the pedal and lost some time. But I could catch the group soon enough. I tried to push as much as my body allows me. My down hills and up hills were faster and more flowing than I’d ever done in Albstadt. Also better than training… 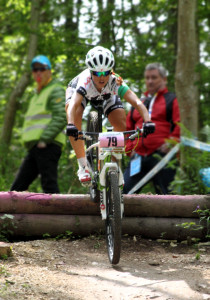 I was feeling better by the second lap. According to first lap, I was climbing and going down the techs faster and on flats I could push better. The course was extremely short and so were the lap times. I just wanted to go one more lap, but the race leader appeared behind me. I sprinted to the finish line as fast as possible just to go one more, but at 80% point I was taken from the race. I was only 35 minutes in the race, that made me a bit sad. Because that was a race I felt myself really good. But it was normal in a very short course which 52/77 riders were lapped and only 25 could finish the race.

So, while leaving the satisfied weekend behind, now it’s time to be concentrated to the European Championships I’ll race with national team this weekend. You, my followers, my friends, known and unknown persons who always supports me… Thank you very much, everybody! I truly feel myself more determined and stronger. See you in St. Wendel.