I had become feeling better by Saturday evening. When there are races after each other, my performance always rises. I get better each day.When I woke up sunday morning, I felt it so… I was nervous, clumsy and excited as I’m used to feel in the race mornings. My legs were full with adrenalin from the morning which was a good sign for me. After a very good breakfast altogether, we drove to the race area. I was truly nervous! While I was preparing myself, our team manager Thomas Schröder prepared my bike. The weather was bright and warm, course was dry. Perfect conditions for a race… So, I started warming up. Around 5 minutes later, suddenly a surprise appeared in front of me. My facebook friend drove more than 400km just to meet me. What a happy moment! That was the biggest surprise of my day.

At 12.30 the race started. The first lap was again hard for me and not fast enough, but yet faster than yesterday. Although I was suffering too much, I forced myself to keep my pace. I had difficulty with breathing. By second lap, I got better and did everything I could to keep my heart rate on (my) upper limits. Because, I truly longed racing on this level. Following laps, it was even hard to swallow water, but I shouldn’t reduce my speed. This time I didn’t want to be lapped. The course was dry and so the race was fast. No time to rest! I was fast on technical sections again, as I used to do. On hills, I tried to get over my limits and tried to climb as fast as possible. Eventually, on the same course, same number of laps, I was 10 min faster than the previous day without lapped, no crash and finished the race 4th as I enjoyed my race and myself very much. The winner was Majlen Müller from my former team Fujibikes-Rockets. Congratulations Majlen! 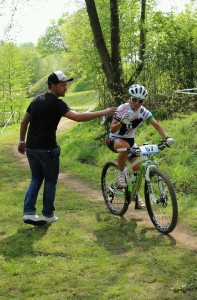 With your permission, I would like to tell about my team a little bit. I had a very funny, joyful, non-stressful weekend and was full with laughter with my friends. Juliane Reaich cooked for us, run here and there non-stop to take photos in our races. About Thomas Schröder… I don’t know how to explain him, nothing would be enough. We were comfortable and harmonious about everything. He talked to me to make me calm down. He cared about my bike. The friendship and team spirit were much better than I was expecting. This made me happy; because when you go to a race, it’s affecting you if the people around you are negative or positive. For all these nice appraoches I would like to thank to my teammate Toni Rudolph, Juliane Reich, Martin Schöne (he was very “schön” as his last name), Orlando Petsch and Christopher Maletz and specially to Thomas Schröder.

Also, I’d like to thank to Rainer Mauritz and Victor Zandbergen who came from far away to meet me and watch my race, for the honour and proud they made me feel. That was a fabulous emotion! I can’t find the right words to explain.

It was a wonderful day and race for me. And so, a very nice Easter weekend has ended.