It was the time. They gave the sign for start and I was ready to sprint. By the time I put my foot on pedal and sprint, the rider on my left side somehow turned her handlebar to my side, hit my handlebar and blocked me. ( I don’t think she made it by a purpose. I believe she was so excited and also very inexperienced.) There was a kind of sharp right turn some meters after start. We were supposed to turn right, get over short but steep hill and turn right again… After this second turn, single trail was coming, so it was important to be there at the first place. But unfortunately I couldn’t do what I had planned and I was 4th. That means I had to push more to catch the front riders.

In the first lap I could pass one rider and placed 3rd right after the 2nd. When we came to a short, slippery but steep hill, another inexperienced rider wanted to be in front of us and couldn’t make it. It was slippery and steep. He caused my rival to fall, but I already knew what would happen. So I let a gap between those 2 and myself before the hill. To be honest, I was angry with him as this was done to me. Because how I was prepared, my rival was there so. Yet, this was a race and I had to think about myself. While my rival was talking anger on the point where she was lying, I passed by both of them from a line that was not possible to pass and turned this situation to my advantage. *After that point the track was going on a wide and a bit flat road, then turning right and fast down and then suddenly going into technical section by suddenly turning a very narrow left. On that point I had to make the gap as big as possible. I didn’t know how far the 1st one was, but I knew 3rd was behind and close. That technical section was an election to me. Because first laps the surface was very slippery and I knew that I was better on techs. I had to race in worse cases, so that was not a problem for me. Therefore while many riders were walking, I could stay on my bike. But of course another inexperienced rider was waiting for me on the second section of technical part. I asked for the pass and insisted, he denied and insisted. He was just walking and I was coming fast. Then I was blocked and slipped a bit on the rocks but fortunately didn’t crash. I had no time to lose. I had to go down faster and I did. When I was at the end of the downhill, I saw  the 1st rider was just some meters in front of me. We were on the longest and hardest uphill of the track. I had power on my legs but somehow wasn’t able to give it to pedals. Something was blocking my legs. I wanted to do more, I knew I could, but was not able to do. She climbed faster than me and I couldn’t make it closer, but at least I didn’t slow down. At the end of the hill a flat road was coming. I had to attack there because 3rd one was also coming behind me. I attacked but somehow I couldn’t use my power. I did not know why. Perhaps, because I was ill? Well, she came and overtook me. I was right behind, chasing and like that we finished the first lap.

I was chasing in the second lap, too. Ups and downs and she had a chain problem close to the finish. Honestly, I don’t like these situations. It doesn’t make me happy passing someone by using her troubles. But unlikely, I feel great pleasure to overtake them when they make technical-tactical mistakes or when they can not read the course. So, I had nothing to do in this situation. Race was going on! I reached the end of 2nd lap on 2nd place and went through 3rd lap. 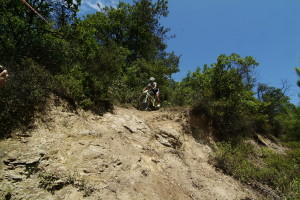 Even though I was not as I knew myself, I got faster in the 3rd lap. The course was getting dryer, so bikes were flowing easier. I came to the beginning of the same technical section with high speed where I was nearly crashed by someone. This sector of the course comes from a wide road I mentioned above*, gives a narrow turn to the left and goes on single trail, then reaches a wide but rocky section. The end of this wide rocky downhill section, it goes down also rocky by turning right from a narrow but very technical section (that’s the point I was crashed on Saturday and in the first lap) and right after, sharp U turn comes and goes on techs by single trails. Well, when I reached by the beginning of rocky sector, I saw someone was walking down by carrying the bike. I warned him and thankfully he moved to the side and kept walking. But, by the time I turned right to the technical section, he jumped into the tech where I was supposed to go first.  I have no idea why! Why? You’d already let me pass. Instead of waiting, why would somebody jump from the top (out of the regular line of the course) to the middle of the tech while someone else was already there? Obviously we would crash! And we did! After I hit him, the branch of the tree on my left side stuck on my jaw bone hardly and I felt that my head touched my back. For a short moment I thought my jaw bone was broken. I wasn’t able to move, was stuck in the tree until people came and took me from there. I shouldn’t have switched off  the suffer and kept going on. No time for suffer! 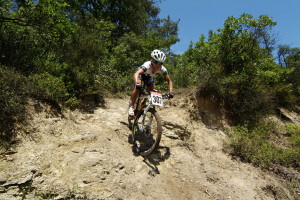 After that U turn the track was going on again “S” single trails and reaching a big and steep rock which was very slippery first 2 laps (yet I was able to stay on bike). But the course was getting dry and this section also got better to ride. I kept my speed on the uphill after the downhill and reached the line as fast as possible.

In the middle of the 4th lap I had cramp in my muscles. Somehow this happens only in national championship. I don’t know why, but I know it’s not because of the lack of Mg. This reduced my speed but I kept on riding as fast as possible and tried to take the control. Normally last lap I would take the bottle which I already prepared, but I’ve changed my mind and instead, I took just pure water. So I finished fourth lap also 2nd and started the 5th and the last lap.

Last lap, I tried to raise my speed up as much as possible but that wasn’t so possible. I was caught an overtaken on the hill I mentioned before right after the rocky downhill. Eventually I finished another season as Turkish 3rd. It was a sad but proud race for me. Congratulations to Turkish Champion and the vise champion. It was good to be on podium. 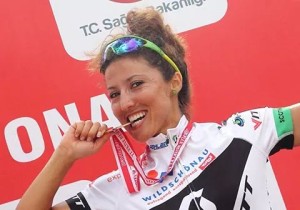 I would like to thank eternally to everybody from the bottom of my heart who waited for me at the finish line, who came to watch my race and had to leave for some reasons, who wanted to come but couldn’t, who supported me from hundreds of kms, and who believed in me. I love all of you.

Take care of yourself until the next adventure…

Yours affectionately from millions of light years away….