We were in my favorite race course, Nove Mesto last weekend.

We had troubles on the way because of the neverending rain with thunderstorm: Darkness, fog, heavy shower and lightenings almost every 5 sec. reduced the visibility below 1m. But finally, after a challenging trip, sliding off the road at a dirty curve, stomach ache because of stress, we could reach the final destination on Friday night.

Unlike Friday, the weather was sunny on Saturday. But the rain for two days made the course very slippery. In Nove Mesto, there is no flat section except the start-finish area in front of the stadium. Uphills and downhills are with roots and rocks, so it becomes very slippery and dangerous in rainy weather. 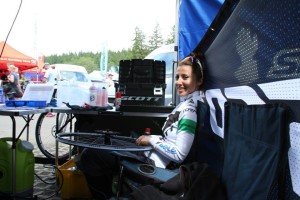 Two laps in the course on Saturday gave me courage technically. On technical sections, I was more active, more daring. Last year I couldn’t pass “Rubena Choice” with my 26er, but this year it was easy with 650B. Actually the course was easier to ride than last year. Eventually, I finished Saturday with confidence, no mistake and concentrated. 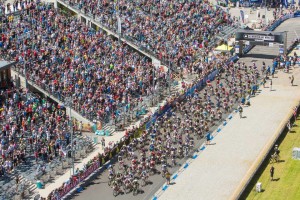 On Sunday, the weather condition was much better than Saturday. It was hot and sunny and the course was almost dry. The craziest spectators in the world were there, cheering. There was a charming crowd and I was at the start line with other 87 riders. After a bad infection, downfall, fight to recovery, 1 week regeneration training and yet I was there, standing! Ready to race with the pride of being with the best riders of the world in this challenging course.

The race was start loop+5 laps. I felt very bad in the start loop, but started to feel better from the first lap. Hill climbs were truly hard and technical. Roots worked on the “very steep and already hard to climb” hills to make them harder and harder. : ) My aim was to pass the course completely on the bike. Already it’s not possible to walk in front of those crazy spectators of Czech Republic. Even if you come the last place, they cheer as you’re the leader and they push you to hold suffer more and further. : ) 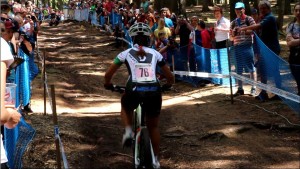 On technical sections my heart rate was at maximum always and I was afraid to crash, thus especially toward to Rubena Choice I reduced speed and tried to gain time to decrease my heart rate. It was a good lap technically, but somehow I was not fully in the race. In the end of first lap, I began to increase the tempo. As I was starting the second lap I was more concentrated, but it got harder to hold the climbs. Yet, I finished this lap faster and without mistake by lapped on the hill. Actually, I was thinking that I would be lapped in the first lap. To go one more lap was a better result for me than I expected. So, they took me out by 80% rule at the end of 2nd lap.

What my friend told me after race was my body language changed after start loop and I seemed better on the bike. Also the comparison with the last year, I almost had the same performance though my illness and loss of training. This means I’m getting stronger every year. 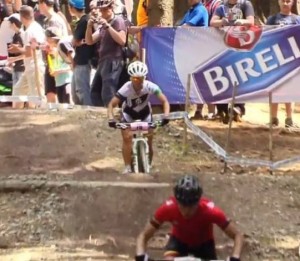 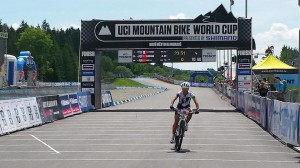 Of course, I was not alone with my joy in Nove Mesto. My team was there too and I wouldn’t be so comfortable and relaxed without them. They did really much to help me. So, I would like to thank to Thomas Schröder (Nove Mesto was his first World Cup experience and he did absolutely perfect), Toni Rudolph and Juliane Reich (she was awesome, especially when she talked to me to make me calm down mentally), to all supporters, to our oakley glasses sponsor oakshop.cz (for their friendly hospitality) and to all friends. It’s an awesome feeling to be with you. Now eyes turned to Albstadt (Germany) for the 4th World Cup race this weekend. Devil’s Corner is waiting for us! : )